We are sad to announce the passing of Bill Wickstead Sensei, 6th Dan, at the age of 93.

Bill-Sensei was one of the great personalities of Aikido in New Zealand. His family will be holding a private service for Bill-Sensei, but Takase-Shihan and Barbara will attend to represent Aikido Shinryukan and its members. 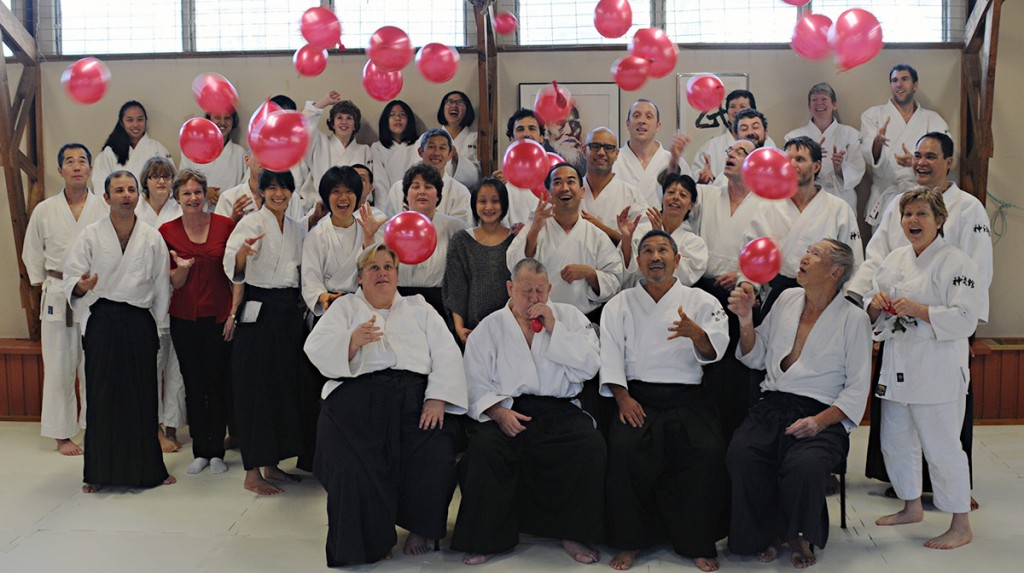 Following is an article written by Bill Sensei reflecting on the art of Aikido.

Who should ask this question? At first the question appears to be incorrect. We may say “Who is Santa Claus?” – but it is not the same. Answering this question is the key to understanding why Aikido is such an exclusive art.

Although Aikido is placed into the category of “Martial Art”, O-Sensei who devised and purified Aikido over a number of decades, tells us it was never meant to be. The one great difference is that O-Sensei forbade it to be used for competition. This foresight was one of the greatest tenets of Aikido.

To prepare to win for one’s own aggrandisement and to bring about the failure of another and cause their impoverishment, despair and misery is a despicable pastime.

Why all of this explanation, why all this philosophy? Because Aikido is often not well understood and some mistakenly assume that it contains the requisites for a competitive, contact sport. But there are no winners and no losers, there are no medals, there is no podium there are no bugles and this is one of Aikido’s paramount advantages.

To reiterate, O-Sensei said that Aikido was never meant to be a martial art. It was created to find the truth; he takes it further when he says that Aikido is love. It is these two edicts which motivate me to put Aikido into the logical perspective where O-sensei intended it to be and clarify the part we should all take to propound its exclusive existence.

In Aikido the belligerent one who is called Uke brings about his own failure by his attitude and actions which are purposely enacted to initiate the response of his partner who is called Nage. To embody the principles of yin and yang, Nage acts in every way, opposite to Uke. Where Uke is ferocious and belligerent, Nage is completely relaxed and perfectly peaceful.

To avoid Uke’s attack, Nage moves out of the way of harm to a position where he can close with Uke or avoid him with the sole purpose in mind of rendering Uike’s intentions futile. This culminates with Uke being rendered inert and propelled or falling to the ground. The way that Uke meets the mat is commensurate with the intention and ferocity of his attack.

It is here at the impending contact or involvement between Uke and Nage that a real danger of physical injury can occur because of the sometimes intricate movements to bring about the conclusion of the predicted cessation of the attack in a peaceful and harmless way. Both partners are exposed to this occurrence and Nage is mostly responsible to see that Uke does not get hurt.

Each partner consecutively plays the role of Uke and Nage so that the whole sphere of passiveness and belligerence is experienced and put to the purpose of creating a good philosophical ambience. One where there is caring and sharing together and not one of dominating the other for a selfish end . Much work and practice is required to bring this conclusion to fruition. This practice alters and strengthens the character and attitude of all who follow the road of Aikido. The partners maybe either men or women, mixed regardless of gender,

Nage is the non belligerent one and you have a kind of a yin yang situation between each of the partners.“Throwing” during the training session each takes part as Uke or Nage.

There is no determining who is best or who got the most advantages or anything like that. It is simply changing from Uke to Nage or vice versa and then at the end of that session there may be the change of partners.

So nobody either wins or loses. Each helps the other.

Uke has a special part to play because he can become injured and he, as a partner lends himself to Nage so the technique can be carried out and then vice versa. Uke and Nage change so there is no one dominating the other.

Here, to interrupt the train of thought, I must insert a great mistake which is not only believed by practitioners of other contact “arts” but also enacted by teachers of Aikido and students alike. These people are those doing Aikido for the wrong reason but most times thankfully, because they have not been told. It is also a big fillip for their ego.

This is the trap:

When Nage intercepts or avoids Uke’s onslaught then, if Uke does not take evasive action, he can go straight into the mat with his face, head, shoulder or other vulnerable part and be seriously injured. Uke avoids this by escaping at a time when he flips over, rolls backwards or forward by various ways. These escapes are learned assiduously during practice in the dojo. It is here that Nage helps Uke to successfully carry out this escape action which is called ukemi.

Nage seemingly throws Uke to help provide impetus for a successful escape. Unfortunately, Nage can wilfully increase this impetus whereby Uke finds it difficult to employ a safe escape but hits the mat with unnecessary superfluous force. The people I am alluding to use this as a measure of displaying their prowess and ability causing  a lot of consternation, hurt and needless injuries in the Aikido world. For me it is contrary to all of the farseeing philosophy that O-Sensei inculcates in his speeches, interviews and formats for Aikido.

Performed effectively, much of Aikido can be done with two fingers but this is considered in some quarters to be insufficiently flamboyant to make it spectacular. In many cases it is not necessary to touch Uke at all to get the same result. How much more is required to make it spectacular?

Aikido, although it is accepted as a very good means of self defence, is not practiced for that reason. So you would say well why is it practiced?

There is not much left. Yes I know that is where you come in. You want to know who Aikido is? You are. Then what good is it to me? If I can’t win championships, I can’t win medals, I can’t go to places and play games, I cannot beat up somebody I don’t like, what is the use of it?

The first thing Aikido gives you the chance to learn is respect – respect and friendship for each other. You know that whenever you meet any of your fellow students on the street or anywhere at a social gathering or in the dojo that you are talking to somebody who is helping you make yourself a better person. You know that that person is not there to try to beat you for any reason because they are not endeavouring to win anything or make you lose and the friendship between you is immutable for this reason.

So without all of these impediments that winning and losing have ,the students can train together and find out how to help each other more and more and this can do nobody any harm.

We are learning patience and tolerance and understanding. And we are learning one of the biggest things: we are learning how to get rid of our ego. This is the first thing that must go completely right from the very beginning and your teacher will probably tell you so.

Do not let all the bright lights, the gold medals, the prancing around, the crowds cheering and people strutting about fool you. Have a look in the background and see what has happened after there has been a major competition and somebody has won it. Just take a look inside the melee and you will see there is another picture.

I think the prime example is boxing; need I say more?

I reiterate. You are Aikido.

And when you have made it your benchmark you will be very pleased you have.

You have got nothing else to do, you have the greatest challenge in the world and that is to make yourself a better person and then you will really win and it will be something nobody can ever take from you. This is not a guarantee it’s a fact.

When you achieve this, you may not notice it but everybody else will; I assure you.

But what is this truth that O-Sensei talks about? Without a doubt O-Sensei’s thoughts were very profound and I do not know whether we could ever know what he really meant by this but there is one thing that is sure you will find the truth out about yourself and from there that must bring other people around you.

It is unfortunate today that it is much more important to be rich than honest and I think that finding the truth out about yourself will help you to be just that; honest. Sorry about not being rich.

Elements of Aikido are learned in the dojo where you are guided by the teacher and assisted by your fellow students.

In the dojo you learn Aikido.

When you walk out the door into the open world that is where you live Aikido.